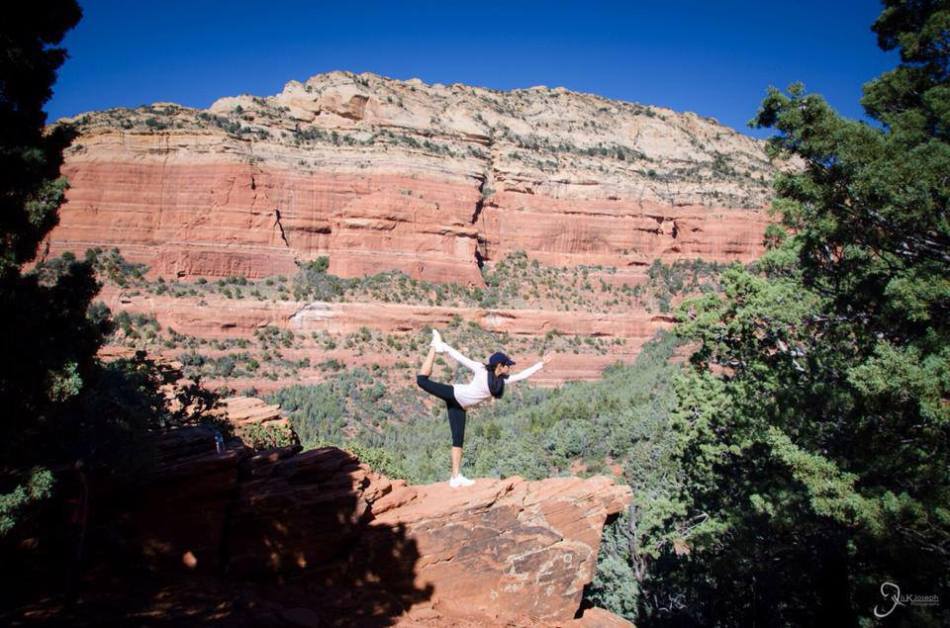 Less than a year ago, I joined a yoga studio to augment my exercise workouts to get in shape for my wedding. Plus, I’m a pretty high-strung person, so I felt that practicing some yoga would be useful for my general well being. I started by trying Bikram yoga because I thought the hot studios would give me a more intense workout. I finally did some research and learned that wasn’t the case.

Bikram yoga gets criticized for many reasons, and of course, the most significant are the infamous reports that the founder of Bikram yoga himself , Bikram Chaudhary, sexually assaulted some of his students.

I don’t condone that, but I also can’t speak to it, so I won’t address that here. What I can say is that after months of practicing, I hate Bikram yoga for the same reasons I love it, and somehow I can’t get away from it.

Bikram yoga sessions are supposed to be 90 minute sessions with a sequence of 26 postures and two breathing exercises in a room heated to at least 105 degrees Farenheit.

While you’re doing your poses, it’s mind-numbingly hot, and I don’t think that level of heat really serves a purpose. When I first started with Bikram yoga, I was under the impression that the heat contributes to increasing the cardio level and helping you burn more calories, but that’s not the case at all. It’s pretty much the same as any other yoga except that you sweat a lot more.

During my second session, I thought I was going pass out. I had to step out of the room just to make sure I wouldn’t vomit. After doing some research, I found out the main purpose for the heat is just to get your muscles more relaxed and warmed up so it’s easier to get in the poses, but in terms of calories burned, it’s got no edge over other forms of yoga.

According to Bikram, the heat is used to soften up the body before you change it.

“Yoga changes the construction of the body from the inside out, so you have to heat it up to soften it … because a warm body is a flexible body … Bikram Yoga also employs heat to further that cleaning process: When you sweat, impurities are flushed out of the body through the skin.”

If that’s the case, I’m sure regular hot yoga (at 95 degrees) is sufficient, and the swoon-inducing 105 degree-studios are unnecessary. At the same time, mentally, the heat makes me feel like I worked out extra hard, and after a long day, yoga in this level of heat wears me out so much I generally hit the hay totally spent and then feel completely refreshed in the morning. So I do love the heat for helping me get rid of toxins and get a complete night’s rest.

I actually love that Bikram yoga sessions are a standard sequence of 26 poses and two breathing exercises. There are no surprises, I know exactly what I’m getting myself into each time which allows me to concentrate on the poses instead of the “when will this be over?” feeling. Some people have argued that the repetitive nature and the 90-minute duration of the class makes it feel like it’s dragging on, but for me, since I already know the sequence and when it will be over, I can focus my energy on getting the poses right rather than worrying that the next pose is going to throw me something new that I may not be able to handle.

Plus, I can easily gauge my improvement in the poses, while using variations to challenge myself and push harder. The repetitive instruction also helps me practice the poses at home own my own, because I can remember all of the teacher’s instructions on how to move into the pose and go deeper. During the sessions, the repetition of poses allows me to work on those poses and improve, and also see how much I’ve improved since last time. For instance, in some other studio classes that I’ve taken, when the routine is changed, I can’t fully tell how I’m doing–whether I’m in pain because the movement is new or because I’m doing it incorrectly.

However, there are times the repetition can be monotonous and also feel like a “cop out.” Personal fitness instructors will tell you that your muscles need to work out in different ways– tear down and build back up again– for you to really reap the benefits of a workout. I can’t imagine that going through the same repeated motions a few times a week can be as useful as switching it up every now and then. Thankfully, there are the variations to help you do that (to an extent).

3) You hold the poses

I love that Bikram yoga makes you hold the poses, rather than flow quickly to the next like some power/flow classes I’ve taken. In the power/flow classes, I find that before I even get into a pose properly, I’ve moved on to the next so I can’t reap the full benefits of the pose or do it properly. Plus, in many of the power classes, the instructor tells us to revert to down dog in between poses, and while a couple down dogs make for a good stretch, too much emphasis on this causes real strain on my shoulders. So the fact that the down dog is supposed to be used as a “resting” position is no comfort to me. (I’ll take samasthiti over down dog any day). With the backbends, balancing, hip and chest opening poses that are held in Bikram yoga, I really feel the stretch and my heart rate racing up. As we hold and work deeper into the poses, I can feel the knots in my body being massaged out.

Of course, this is also one of the more challenging aspects of the practice, and on days when the room is overbearingly hot or I don’t have patience, it can be grueling. I’ll admit there are times I’m just counting down to when the instructor will tell us to “Change!” positions or that I am unable to hold the pose when I feel strain in my hamstrings. However, since yoga allows you to make adjustments based on where your body is on a given day, I do that and try to stay focused.

Overall, I do enjoy Bikram yoga and will continue to practice it, but I have canceled my automatic monthly membership because I found I wasn’t going to the sessions as much as I would like and I also want to explore other style of yoga… in perhaps slightly cooler temperatures.

2 comments on “Why I love (and hate) Bikram Yoga”