Author’s note: This post is the first in a four-part series covering a Beginner’s Guide to Alaska. Stay tuned tomorrow for the second installment on wildlife.

I’ll never forget what it felt like that afternoon, flying over a sea of ice and promontories that pierced the sky below our floatplane. It was as if I had been transported to a time before human existence, to when the earth had frozen over, leaving behind only a desolate expanse of ice.

Etched into this seemingly boundless blanched landscape were bright cyan ridges, almost turquoise in some parts, creating intricate patterns and folds, and offering glimpses into the glaciers’ depths.

This was the Alaska of which I had dreamed, and it was breathtaking to behold. 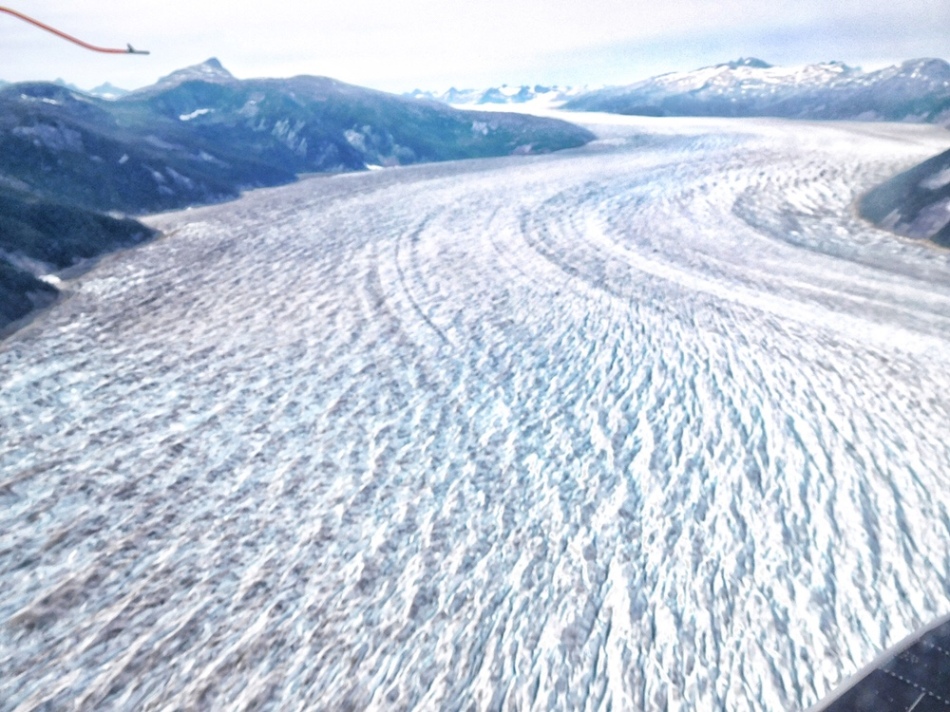 My family and I spent a one-week vacation in August cruising through southeast Alaska’s Inside Passage, which took us to Hoonah (Icy Strait Point), the Hubbard Glacier, Juneau and Ketchikan. Through the week, we enjoyed the amenities on board the Celebrity Infinity ship and the scenery of the Tongass National Forest, fishing villages, and the mountains of Glacier Bay National Park that surrounded us. The views were wild and unsullied by human interference.  I soon realized this tiny sliver along the edge of Alaska we were witnessing was only a fraction of the treasures that America’s last frontier held. However, it was enough to convince me that a longer, more extensive visit to other parts of the state would be required to truly appreciate and experience all that Alaska has to offer.

Here is Part 1 in this beginner’s guide of what to expect from Alaska, and reasons why a cruise is a great introduction to America’s 49th state.

Tip of the iceberg

I knew Alaska was big. It didn’t occur to me just how big until I saw our cruise ship’s itinerary and studied the landscape during that week. To put it into perspective, a seven or even 10-day Alaskan cruise only goes as far as Skagway, or at best, Anchorage(one-way):

As the largest state in the US, Alaska could fit the state of Texas twice, or, to put it into terms that are more relevant to me, it could fit Florida 10 times, or Georgia 11 times, according to an interactive graphic available at Alaska.org. That’s huge! Across this terrain you’ll find rocky shores, temperate rainforests, glaciers, ice fields, mountains, lakes, tundras…. The list goes on.

When my parents first told me they were planning a family vacation to Alaska, my mind naturally went to Denali (Mt. McKinley) first. I figured that was the main attraction in Alaska.

While Denali is one of Alaska’s key natural assets, it is not the only mountain or natural feature worth seeing in these parts. Furthermore, to visit Denali from a cruise, you have to venture much deeper inland by adding on land tours (not just a daylong excursions) and these can be coordinated with the 12- and 16-day cruise + tour combinations.

Still, there are many other stunning mountain ranges, national parks and land features to see in Alaska through a cruise vacation, even if the highest North American peak is out of reach.

The focus of this Celebrity Infinity cruise was the Hubbard Glacier, a tidewater glacier that spans nearly six miles across where it touches the ocean in Disenchantment Bay. Tidewater glaciers are those that form in the valleys between mountains and work their way down to the ocean, according to the National Snow and Ice Data Center. The Hubbard Glacier is part of America’s largest national park, the Wrangell St. Elias National Park, which gets its name from the St. Elias mountain range. Here, at water’s edge, Hubbard meets the Valerie Glacier. 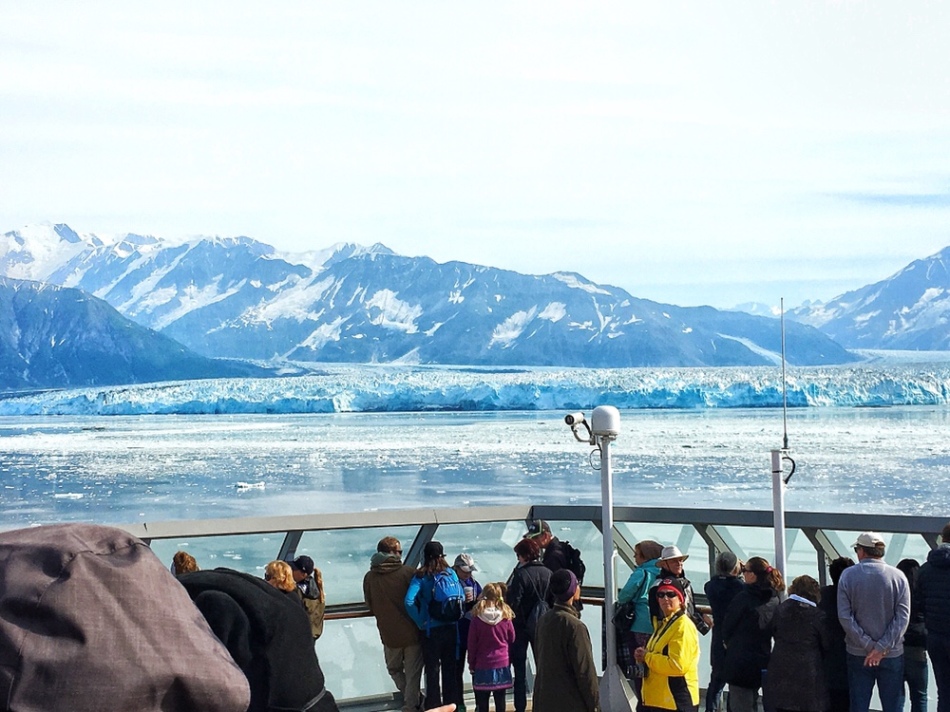 On the third day of the cruise, our ship stopped in the bay for about an hour– roughly a half-hour on each side of the ship so people camped on either end of the vessel would be able to view the glacier fully. That morning, the ship’s resident naturalist, Mickey “Live” Richardson, called everybody out to the ship’s viewing decks, providing information about Hubbard and the surrounding land features. If you looked closely along the shores of Disenchantment Bay, he said, you might even see brown bears hunting for salmon. August is the peak season for salmon in Alaska, especially halibut and silver salmon, according to Alaska.org, a travel guide and visitor resource maintained by Alaska Channel.

I had piled on sweater upon sweater, and even a windbreaker, hat and gloves, when I stepped onto the fourth-level deck outside the Rendez-Vous lounge. Still, a mile from the glacier the cold bit at my face. The wind caused my eyes to tear, so I rushed back inside to view from behind the tinted glass doors, while my husband, ever the photographer, stood relentlessly on the deck to not only snap photos, but to take in unfiltered views of the glacier.

From the ship, you could get an unobstructed view of Hubbard wedged in the valleys between Mt. Vancouver, Mt. Hubbard, and Mt. Seattle.  Even at this distance, you hear what sounds like thunder crackling, only to see seconds later large pieces of ice falling away from the glacier and into the water below. This far away, when you hear the noise and see it in action, it almost feels like you’re watching a slow motion video. This phenomenon is known as calving, and it’s how icebergs are formed. These icebergs can be as high as ten stories.

Calving is common for the Hubbard Glacier, as it continues to advance. Hubbard Glacier is unique because it is one of the few glaciers that continues to grow and advance with ice accumulation, according to the USGS.Glaciers go through back-and-forth stages of advancing (gaining ice) and retreating (losing ice).

As you cruise the southeast passage to and from Hubbard, you also pass by Glacier Bay National Park, where the snow-capped peaksare so mesmerizing that they glow in the copper hues of the setting sun. One night, after a formal dinner on the cruise, my husband and I walked out on the deck to enjoy the sunset. This was possible so late in the day because the sun stays out in this part of Alaska for up to 18 hours in the summer. (However, this also means that seeing aurora borealis on a southeast Alaskan summer cruise is very rare, though here in Glacier Bay, is your best chance of seeing it if you stay up late enough). 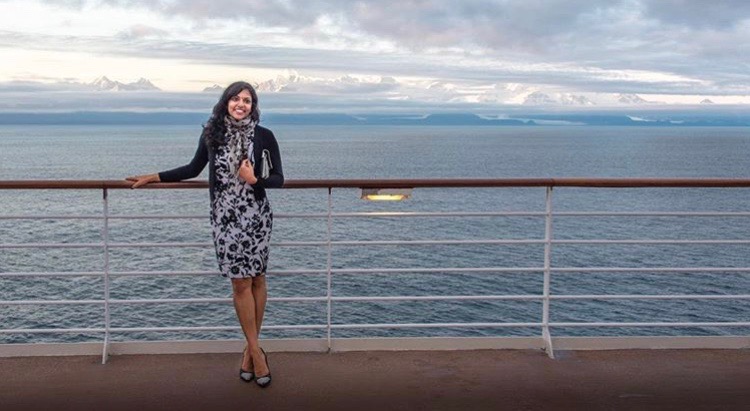 Not many other people were out on the deck as they were still at dinner, or at one of the live evening shows in the cruise’s theater. It was so peaceful, and it made me wonder what it must have been like for the first explorers of this region to set eyes on these iridescent peaks at sunset.

Plus, if we stood long enough on the deck and watched intently, we might even spot a break in the water and a spray of mist from the surface…

[Up Next in this series: Wildlife viewing in Alaska, a Beginner’s Guide to America’s Last Frontier]

5 comments on “A Beginner’s Guide to Alaska: Why Cruising Is Just the Tip of the Iceberg”