Stopping over in Salt Lake City for a day and looking to make the most of your visit? Even if you’re only visiting for a short while, you can still have a sweet stay in this city by checking out these hot spots.

We visited Salt Lake City for the first time this summer as a stop on our trip to Grand Teton and Yellowstone National Parks. We built in one extra day to see Salt Lake City on the return trip back to Atlanta from Yellowstone, and we packed in as much as we could in that single day to digest as much as possible of the beehive state’s capital city. From morning to evening, here’s our guide on how to spend a full day in the Crossroads of the West:

1. Breakfast at the Rose Establishment

Start your morning off with breakfast at this charming coffee shop/tea house that serves a variety of sweet and savory brunch items in an airy garden terrace milieu.

I was drawn to the greenery of the place, provided by plants on the outside patio. The menu was very vegetarian friendly, too. Personally, I had my eye on the summer chopped salad and the cauliflower sandwich, but given our tight schedule, I picked up a jalapeno cheddar biscuit and an iced London Fog coffee latte to go. A few sips in, the latte proved to have a decent kick, though it was rounded out by the floral and sweet tones of the lavender bitters.

Note: The focus at the Rose Establishment is tea, so if you want a coffee latte, specify it as such. Otherwise, you’re getting a tea latte!

2. Morning at the Planetarium

From breakfast, head over to the nearby Clark Planetarium and book tickets for one of the many IMAX features that are running, based on your preference.

We spent a couple hours at the planetarium waiting for our IMAX film to start, but also, because we are nerds and we were engrossed by its interactive tutorials and exhibits. During our visit, there was a lot of information provided to visitors about the upcoming Aug. 21 solar eclipse, since a total solar eclipse would be viewable by driving just north of Salt Lake City to Idaho or Wyoming.

The cool thing about the planetarium is that it provides a ton of interesting information, and admission is free, so the only attraction you have to pay for is your movie ticket if you choose to go. Trust me, the air-conditioned facility wasn’t a bad place to spend mid-morning hours just as the sun was starting to bake the city.

Being early July, the weather when we visited Salt Lake was over 100°F and extremely dry. I found myself constantly having to moisturize my skin. Thus, spending a few hours at the air-conditioned planetarium was a welcome reprieve from the oppressive heat outside. By the time we got to our next destination, we prayed for the solar eclipse to arrive sooner, as the sun was searing above us. 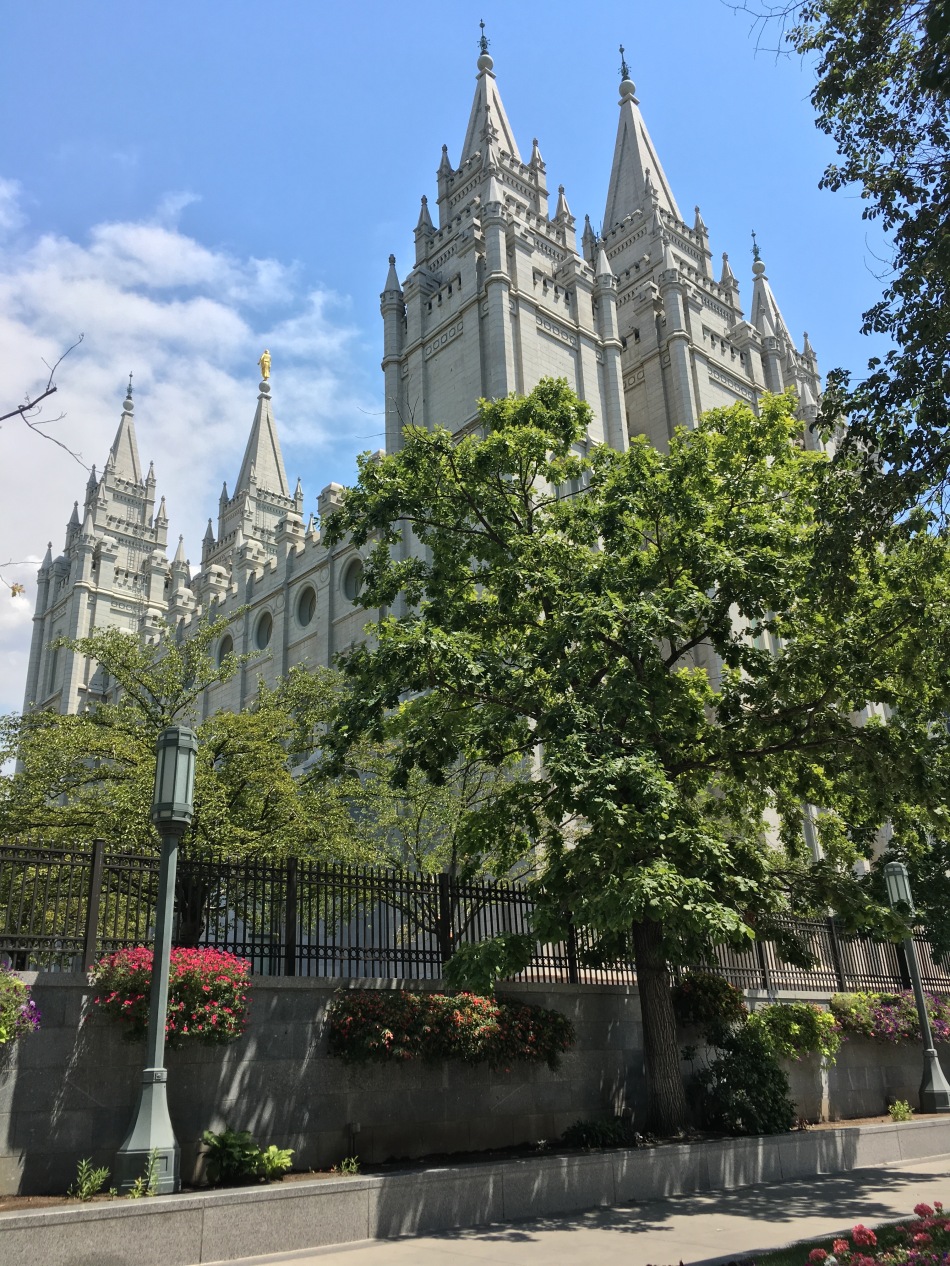 From the cosmic, experience the divine: Head over to Temple Square, a 10-acre compound where the Church of Jesus Christ of Latter Day Saints’ Temple is located. 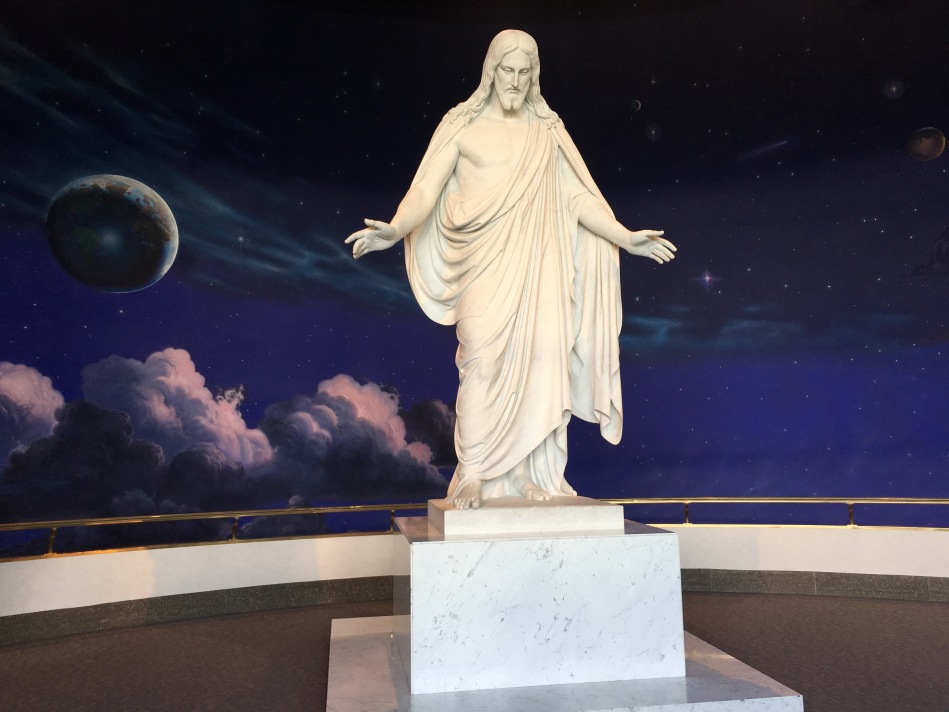 Salt Lake City is known for being the global Mormon headquarters. Here is where followers of this church, the Mormons, followed American politician Brigham Young from New York, to settle. Salt Lake City houses a large and elaborate Mormon temple that is impressive both inside and out. While we, as visitors, could not actually go into the temple, because access is restricted, we toured the museums surrounding it, which outline through the history of the church, how the temple was built, and provides a video tour and detailed replica model of its lavish interiors. Whether or not you’re a believer, this massive structure is an impressive site to behold and commands attention in the city’s downtown, so it’s hard not to stop and snap a few photos. 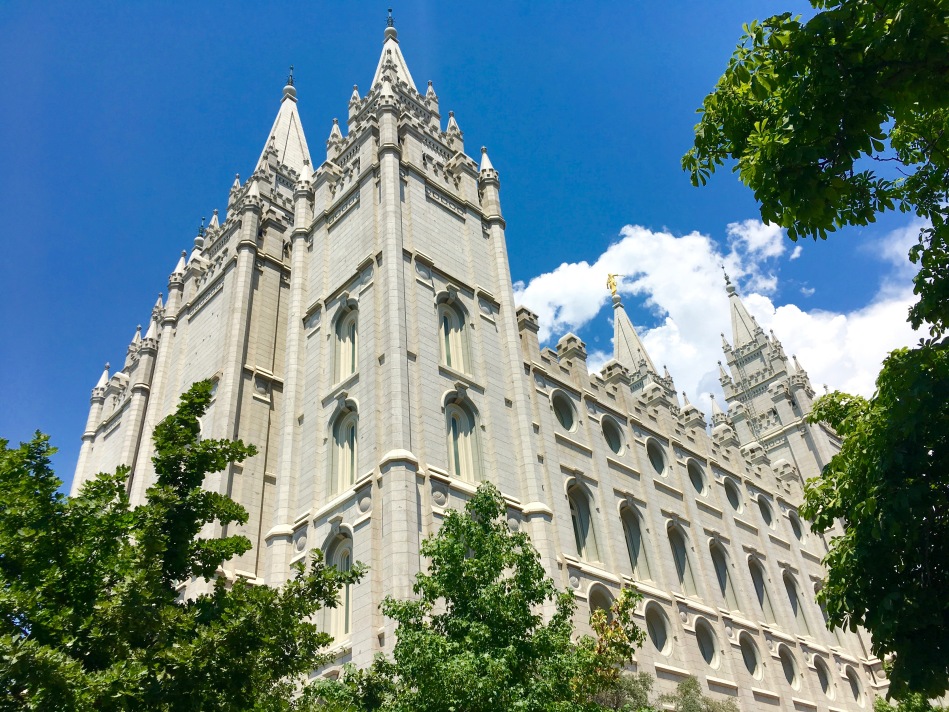 However, the sun was beating down on us by this point, and we were in need of some refreshment, so we figured it was a good time to escape the heat and have some lunch.

Just a short walking distance from Temple Square is Chile-Tepin — if you can withstand the heat during the walk. Otherwise, drive over there like we did.

This chic Latin American eatery has all of your typical Tex-Mex favorites like burritos, tacos, nachos and quesadillas, and the staff are willing to accommodate vegetarian requests, too. For once, I skipped on the nachos and went for a veggie burrito filled with hongos, or mushrooms, while my husband got the chicken nachos and sipped on an ice-cold cerveza.

While you wait for your food here, you can enjoy the whimsical, vibrant artwork that adorns the restaurants walls. 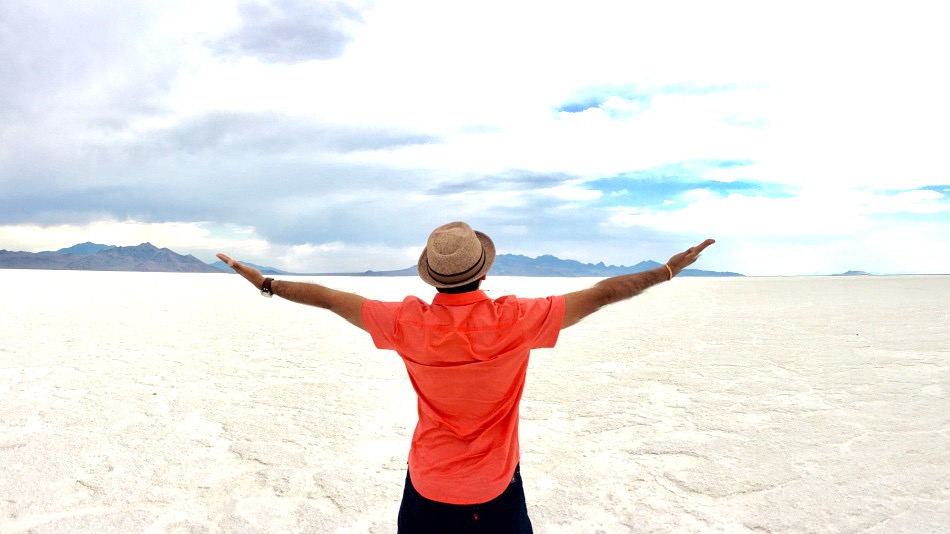 Tummies full, we headed to the Bonneville Salt Flats, a vast, thick salt field west of Utah’s Great Salt Lake. This terrain is totally flat as its name indicates, and has served as the site for the Bonneville Speedway, where races and speed tests are conducted.

In prehistoric times, during the Ice Age, this terrain was the site of a large ice lake that eventually dried up over centuries.

It took us about 1.5 hours to get to the site of the speedway. The area is open to the public, and visitors can drive right onto the flats. On the way there, we passed a Morton salt plant and the Great Salt Lake, the largest salt water lake in the Western Hemisphere. 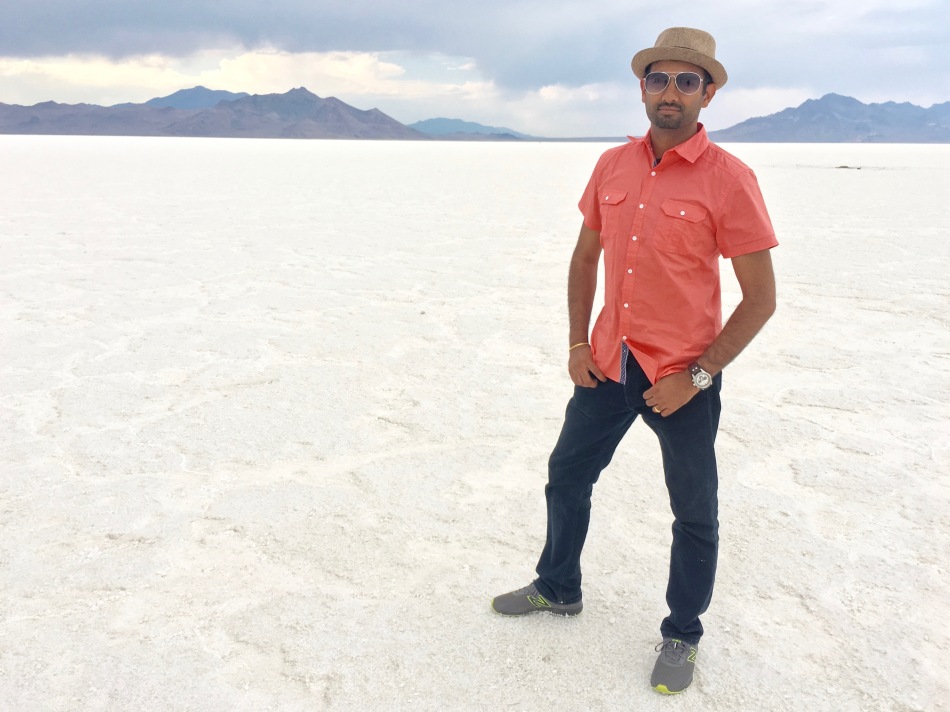 The sky was overcast when we got there, so the scorch of the sun was no longer an issue. We raced across the flats, got out of the car and soon discovered this was a great spot for an impromptu photo shoot. 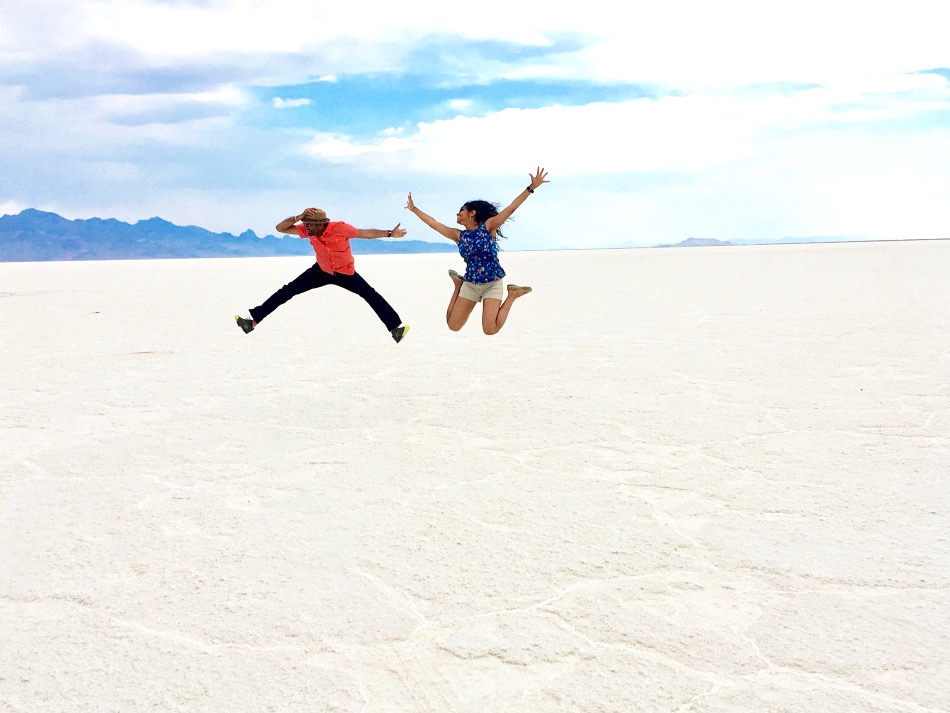 Salty and grimy from the salt flats, we needed to freshen up. 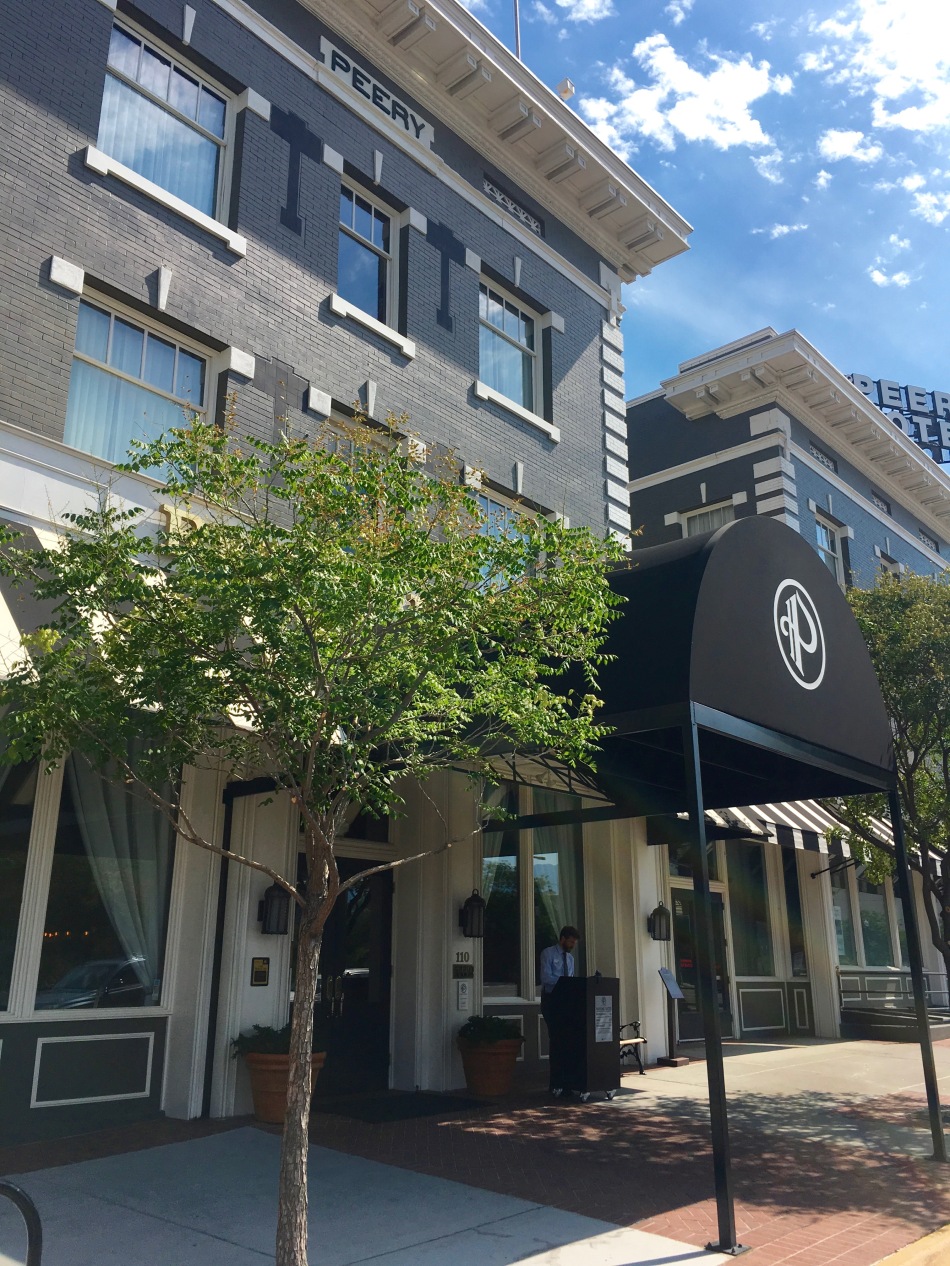 Before we went out for dinner, we cleaned up at our hotel, the Historic Peery, and decided to grab a quick cocktail there while we were at it. After all, this historic hotel has a cozy bar adjacent to the lobby, Carnegie’s Public House, and a DJ had just set up his equipment and started playing music. 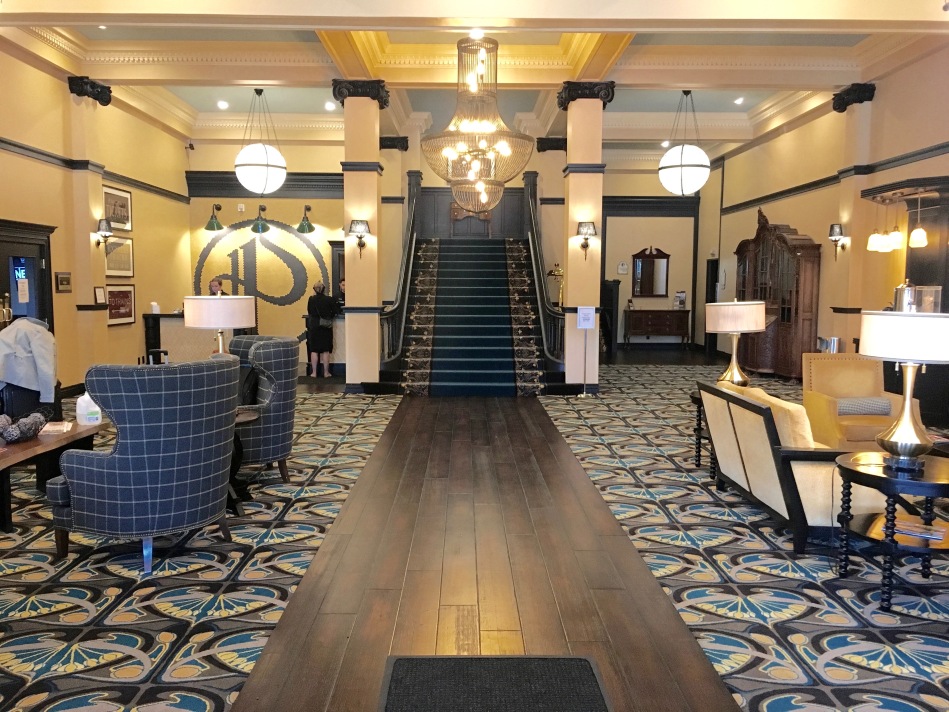 We had selected the Peery Hotel because of its unique, historic design, though we didn’t expect to spend much time in it. However, since the bar had a shuffleboard and the DJ was spinning was some cool tunes, we figured we would linger a bit at the bar to work up an appetite for dinner. 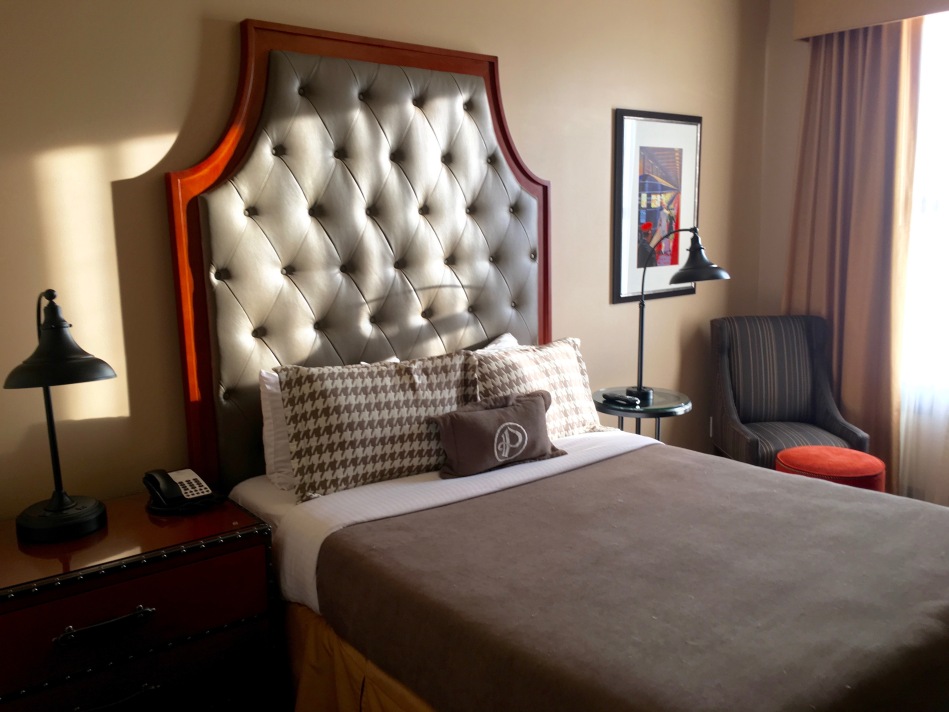 The accents and features of the hotel evoke symbols surrounding railroad and mining industries, bringing together the history of the area and the businesses that thrived here, as well as paying homage to the Peery family. They established the hotel in 1910 to accommodate the business people coming out west for the promise of mining that Utah offered.

Once two rounds of shuffleboard were finished, our stomachs told us it was time to grab some grub.

After a week of eating pizza, salads and burgers at Grant Teton and Yellowstone National Parks, we were all ready for some spicy Indian food. We found a highly rated restaurant close to our hotel, the Himalayan Kitchen. Plus, given that this had some Nepali dishes on the menu, I thought it would provide a much needed twist to the regular Indian food to which we are all accustomed.

Dinner here was delicious, and the spice levels just right (if you like spicy food ;-P)! We ordered the Himalayan vegetable momos as an appetizer, and shared some vegetable subjis and the Nepali quanty masala. The omnivores in the group shared some vindaloo as well. All of us walked out of the restaurant content.

In fact, when I came back from the trip to tell one of my coworkers who is from Salt Lake City that we had dinner at Himalayan Kitchen, he agreed it’s the best Indian restaurant in town, and the reviews and awards certainly underscore its popularity.

We passed a few whiskey bars on our walk between the Peery and Himalayan Kitchen. The night was still pretty young after dinner so I would have liked to spend more time out to soak up the Salt Lake scene by visiting one of them, and sip on an after-dinner cocktail. One in particular, White Horse Spirits and Kitchen, specifically flaunted aperitifs and digestifs– spirits meant to help with digestion pre- and post-meal. I certainly could have used a digestif after that dinner!

Unfortunately, some of us weren’t carrying our IDs, so we weren’t able to go in, but we would have loved to try one of the craft cocktails such as the Candice Broke Her Arm or Italian Americano, both of which include hints of coffee liqueurs.

Many people recommended we visit Park City, the site of the 2002 Winter Olympics and host site for the Sundance Film Festival. From here, there are numerous trails to hike and bike in the summer.

We did not visit Park City because we felt we had had our fill of the outdoors through most of our trip through Yellowstone and Grand Teton, so we skipped this, but I would certainly explore Park City on my next visit

This Zagat-rated microbrewery was right across from our hotel and would have been great spot to cool off with some late afternoon brews. It has outdoor patio seating and serves craft beer. There are a few locations, but the one across from the Peery is the flagship site. However, due to our time constraints, we weren’t able to visit.

These 10 spots are just the beginning, as Salt Lake City has a lot to offer, but I promise this short list is enough to keep you busy as a bee from dawn until dusk.