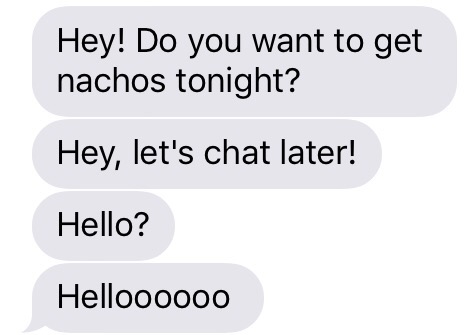 We have a lunch group at work that gathers in the common area of our floor to eat together, and usually, someone brings up some spicy social topic they heard about on a morning entertainment talk show.

This week, the topic of ghosting came up. For those unfamiliar, ghosting is when you call or text someone and they essentially disappear from your life entirely by not responding to your calls or texts. It’s cutting off all communication with someone in your life without providing any explanation. This usually happens in the dating context, but if you ask me, it could apply to any relationship, even in the professional context. Unfortunately, this behavior has become a widespread phenomenon. Per a poll of 800 people conducted by the dating app, Plenty of Fish, 80% of daters between the ages of 18 and 33 said they had been ghosted.

On this particular radio show, a person who has been ghosted by someone else calls into the radio station, explains why they are confused that the other person cut him/her off, and then the radio station proceeds to call up the person who did the ghosting on live radio to get an explanation from him/her.

Sometimes, the explanations of why the person was cut off make sense, like “She stole from my wallet when I took her back to my apartment.” Or, “He made a racist joke at dinner so that ended it for me.” However, in some cases, as it was this week, it’s as simple as “I just wasn’t that into her.” If the person who was ghosted did nothing wrong, doesn’t that person deserve the common courtesy to be told you’re not interested and that you just didn’t feel the chemistry?

Why is it so hard to confront people about this? At least acknowledge the other person’s existence to end the communication clearly so they are on the same page, or fine, use a white lie to cut off ties, but at least let them know the engagement is going to end so they don’t waste their time trying to call and message you. Otherwise, the person is left guessing. If you want to block them out, wrap up the communication with a goodbye message letting them know you’re not interested in interacting further. It’s just the right thing to do! Then go ahead, you can block their number for eternity if you don’t want to be bothered.

When I brought this up to my lunch crew, one person said I should have no expectations of how someone should behave just because I would behave differently. If it was just a one-time date, why is any explanation owed? Okay, fine. Maybe I’m on my high horse and haven’t been in the dating game in awhile, but for this situation, it doesn’t seem to be about just about having a difference of opinion. This is about social norms and what to expect of each other ‑ common decency and accountability, which I feel we have started to let go of as a society.

My colleague, who said she’s been ghosted before, argued, “It happens all the time. I just expect it now so I don’t get disappointed later.”

What?! Why are we accepting this as a valid way to behave?

It both saddens and infuriates me that this is how cynical and complacent we have become. Have we set the bar so low that we expect the worst of other people right off the bat? And if this is what we are doing, we are simply perpetuating a culture of avoidance, where it’s ok to be a cowardly jerk, for people to avoid situations that make them uncomfortable or that they think are unpleasant, essentially creating a spineless society that doesn’t know how to handle emotions or interactions with people in a mature way.

I know that some people might argue that ghosting gets the job done, sending a clear message that you are not interested, and that it is in fact, the ghostee who is emotionally immature for not being able to deal with the clear rejection.  But that’s because the ghostee has no idea what they did or why they are being rejected. Even mental health professionals consider the silent treatment a form of emotional cruelty.  The ghostee is trying to make sense of the end of what seemed like an otherwise pleasant interaction.

Remember: This isn’t just some random person on the street you passed by or the barista who served you your coffee this morning. This is a person with whom you proactively met and engaged with in a certain way, and in some cases, maybe even intimately. Now, that person is following up with you. Do you not at least owe them some explanation for why you want to cut off all communication with them?

And more importantly, to the ghosts out there – do you not owe it to yourselves to raise the bar?

Plus, if we start to expect and subsequently accept the behaviors that “happen all the time”, couldn’t we then use the same argument for other less-than-righteous acts? We could say that cheating on a spouse or partner is also quite prevalent, so we should just “expect it”. But we don’t. We don’t accept cheating as a valid way to behave, though it happens. So why do we do we allow people to completely disregard our existence and feelings through ghosting? Just as with cheating, it’s selfish. It allows the ghost to avoid the unpleasantness of providing a reason for not being into someone, while leaving the ghosted person in confusion and agony. It gives the ghost all the power, since the ghostee has no way to ask questions or be heard, which is important for one’s self-esteem, according to Dr. Jennice Vilhauer, director of the Outpatient Psychotherapy Treatment Program at Emory Healthcare.

If you think you’re doing the person a favor by not hurting the other person with a direct message, remember: The person is going to feel rejected either way, whether you ghost or overtly say you’re not interested. At least have the decency to let them know the engagement is going to end and why you’re ending it so it reduces the amount of time and energy they spend agonizing over it.

Let’s set the bar for expectations higher and quit ghosting: The other person deserves some closure, and you deserve to be held to higher standards.

Where do you stand on ghosting, or how would you handle ending a relationship?

Have you been on either end of a ghosting experience?