Battered, fried, or served under cubes of queso, the street foods of Cartagena sizzle from aluminum pans. Next to them, stacks of fresh fruit ooze a rainbow of juices, mocking the walls of Getsemani’s kaleidoscopic buildings.

The calles of Colombia’s coastal city are no place to start dieting, but the ingredients and preparation of local foods provide a view into the country’s historic influences and daily life of its current inhabitants.

I visited Cartagena in April 2018 with my husband (who is not a vegetarian), and I found that for vegetarians, the health conscious, or those who prefer bolder flavors, dining options are limited — but do exist — at select gems around the jewel city.

My suggestion: Stick to light snacks or meals during the day, stay hydrated, and then, indulge and cool off at the city’s finer restaurants and rooftops in the evenings. You won’t be missing out in the daytime, and you’ll avoid getting weighed down while strolling the colorful streets under the unrelenting sun.

Here’s my guide to eating and drinking in Colombia’s walled city. Whether at your hotel or from the carts of vendors, start the morning with arepas, or fried corn meal cakes, fresh fruit, and tinto, a cup of black Colombian coffee, to fuel you for the day. Tinto is not like the Colombian coffee that is exported to other parts of the world, according to Brayan Munoz, a tour guide with Scarlet Macaw Trips. While Colombian coffee is globally renowned, the tinto that is widely available to the working class within the country is a commoditized version that’s thicker and more concentrated, Munoz said. The bean quality is sub-par to what’s served in the gourmet coffee shops or exported internationally, but I felt that trying a cup of the local brew was part of experiencing the local culture firsthand. 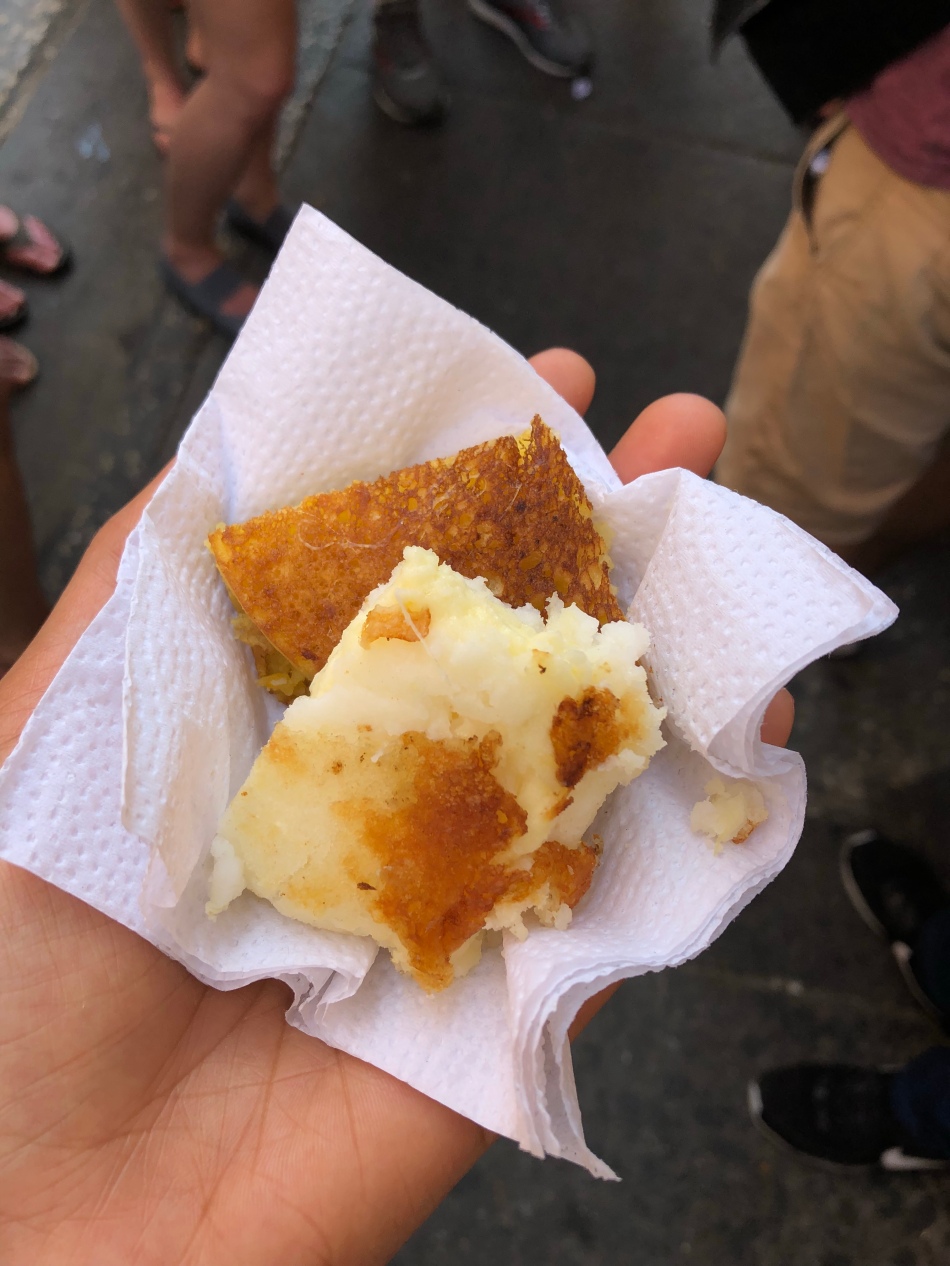 Meanwhile, arepas, which originated as a staple hundreds of years ago, now come in a number of varieties and methods of preparation (baked, steamed, boiled, too!) and continue to be a local favorite at any time of day. I particularly liked arepas con queso served by street vendors, and I didn’t feel guilty about the cheese and carbs because of all the calories we were burning throughout the day (Want to know how? Try these 4 Active Adventures in Cartegena de Indias). Another variety, arepa con huevo, is said to reflect various groups that shaped Colombian history and culture: the fried egg at the center resembles a Spanish tortilla; the outer batter deep fried to a crisp, under African and Arab influences; and the corn meal ground from local maize represents the indigenous people, according to Cartagena Connections tour guide Jan Hubner.

Hubner also introduced us to a smorgasbord of other heart-stoppers such as bocadillo con queso costeno, considered a matrimonio or “perfect union” of a block of guava jelly, and the cheese most popular along the Caribbean coast, queso costeno.

These snacks are steeped in history, oil, and sprinkled with a dash of salt.

For something sweeter, try the Colombian version of an ice pop – boli – a midday necessity for cooling off as you explore on foot. These took me back to my elementary school days when we’d get Fla-Vor ice pops at snack time.

It was during our street food tour through the walled city and colorful Getsemani neighborhood that Hubner showed us balconies draped in veils of bougainvillea. We noticed the elaborate doors of the homes, each adorned with an animal symbol on the door knocker. Hubner said the symbols on the doors represented what kind of family lived in the homes. For instance, marine animals represented merchants, lions represented military officials, and lizards represented royalty.

Unless we were on a guided tour during which lunch was served, we skipped it, since our primary need was to stay cool and hydrated. But on three occasions during the week I had opportunities to taste local, tropical fare. For a vegetarian, this typically consisted of arroz de coco, prepared by cooking rice in coconut milk, and a side of vegetables, sometimes fruit, and patacones, or twice-fried green plantains. While visiting the fishing village of La Boquilla, guided by Scarlet Macaw Trips, I had the chance to make some coconut rice for myself.

Munoz said the Afro-Colombians in the village of La Boquilla are direct descendants of African slaves transported to Colombia by the Spanish, and thus their method of food preparation reflects their roots. 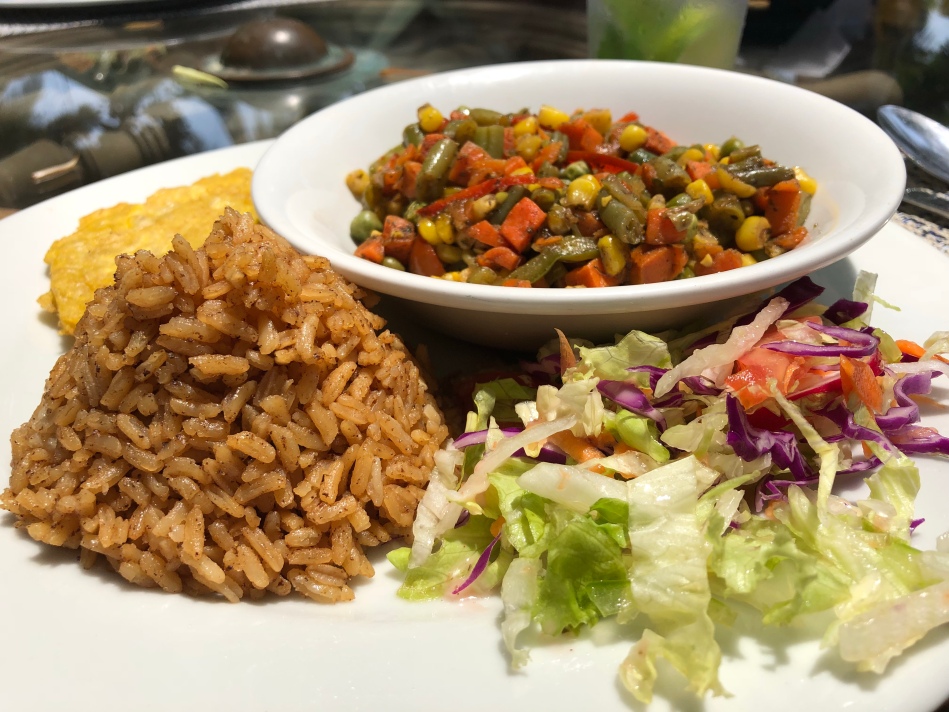 The fish, usually snapper, are provided by the sea or obtained through hatcheries that villagers have set up in their backyards to help improve their economic situation. For plantains and other produce, locals rely on getting the best deals on Mondays, Wednesday and Fridays, when trucks bring loads of produce to the markets, Munoz said. Consumers ask vendors their price per “mano de platano”, or a “hand of plantains,” referring to a bunch of five.

As for patacones, think of them as French fries, a crispy side dish served with any main course. But vegetarians and vegans take note: Patacones are often cooked in the same oil as fried fish. This style of fried fish is similar to what I’ve seen served in Kerala– not a filet, but a whole fish that stares back, with the bones in, so even for my husband, this was a bit difficult to stomach. 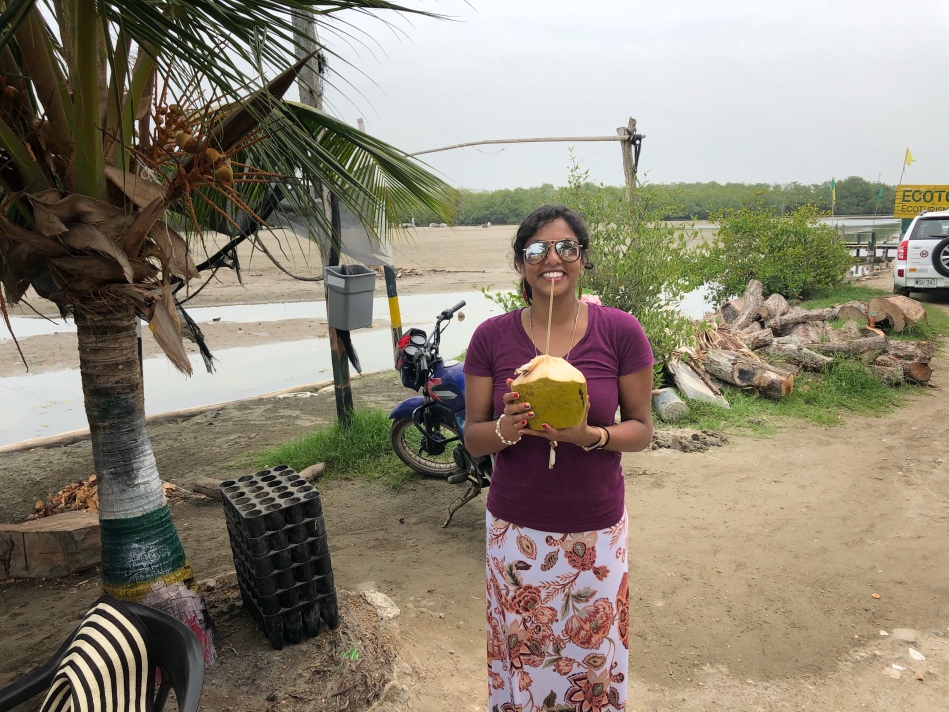 No matter–you can wash it all down with a freshly squeezed lemonade, a chilled Aguila or Costenita, or tender coconut water, agua de coco.

If coconut water isn’t enough to keep you energized through the day, try a fresh fruit juice or caffeinated concoction at Beiyu Acai Café in Getsemani, where we stopped on our first day, to cool off.

The café’s menu is suitable for all types of health food fans, as it includes organic, local, plant-based, slow-food varieties of sandwiches, grain bowls, juices, burgers, crudites platters and all-day brunch. It’s because of its vegetarian-friendly menu that I first chose this as a stop for lunch later in our trip, but as it happened, we unwittingly came across it while exploring Getsemani on the first day. I walked in, sheathed in sweat, and ordered a citrus mixed fruit juice, which was shaken into a frothy cloud, and disappeared within seconds.

On another afternoon, we got our afternoon jolt at the specialty coffee shop, Epoca Espresso Bar & Roasters. I was definitely not going to leave Cartagena without trying a  Colombian roast. Outside of any ecotour to a coffee farm, Epoca was the place to do it. Coffee lovers can select beans for purchase, which are then roasted within the coffee shop for you to take home. Customers can choose six different brew styles from aeropress to siphon, to savor their favorite cuppa. 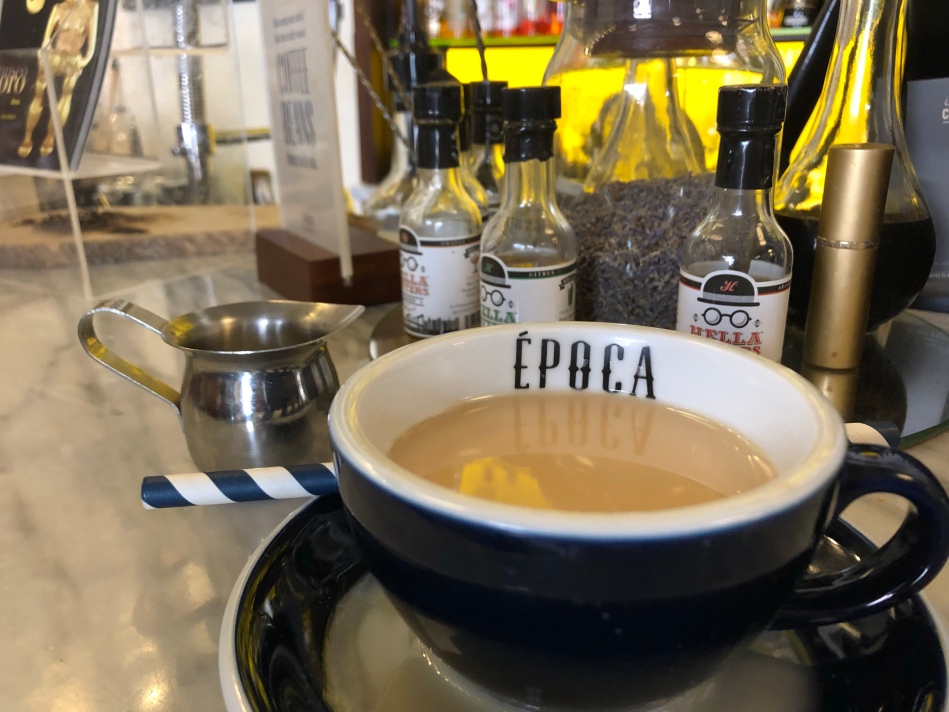 While connoisseurs will be particularly impressed by the knowledge and technique of its baristas, who relish the coffee roasting and brewing process, even others will enjoy the cafe’s food and beverage selection, as well as its decor, which boasts antiques and collectibles. Of note is an original La Pavoni lever coffee machine from the 1950s –  one of only 151 of its kind around the world.

The mocha frappe I ordered was whipped evenly into a bittersweet blend, drizzled with molasses and crowned with a dollop of whipped cream.

Finally, if a sugar rush is what you’re after, try a dessert crepe or scooped sweet treat at Crepes y Waffles, a creperie started by two college students, which has now expanded to dozens of locations across the country.

After all of your excursions for the day, get ready to unwind and cool off at one of the city’s many bars or lounges.

Do not miss sunset cocktails at the rooftop of the Movich Hotel. Take in panoramic views while sipping some bubbly, and stay until the honeyed skies turn dark.

For a more casual experience, try the tawdry and laid-back KGB located at the Plaza Fernandez de Madrid.

This vodka bar is plastered in garish Soviet posters and memorabilia, and offers a more relaxed environment for striking up conversations with other tourists or for watching passersby in the plaza.

With your appetite whet from your libations at twilight, tuck in for a sit-down meal in the courtyards at Di Silvio Trattoria or, our favorite, the Vera, at the Tcherassi Hotel and Spa. 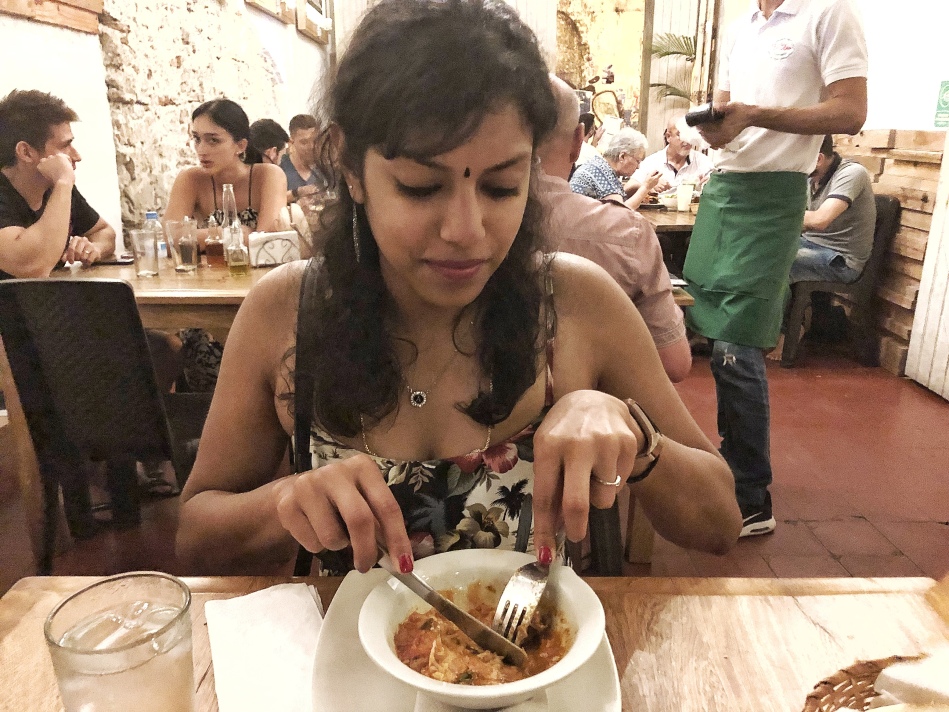 The restaurant was established in a colonial house that once accommodated Colombians and foreigners who worked in a soap factory more than 40 years ago. Sitting in the walled courtyard reminded me of the streets of Europe.

Meanwhile, Vera offers an elevated Mediterranean menu against the backdrop of the Tcherassi Hotel’s illuminated poolside. The crunchy fried chickpea starter tossed with diced red onion and coated in lime juice is still a dish that my husband and I talk about today.

For guaranteed vegetarian options, Indian restaurants are the way to go, as India is the country with the highest vegetarian population, and its cuisine caters to those tastes. I’m pretty sure I’ve sought out an Indian restaurant at every place I’ve visited or lived, and Cartagena was no exception. I like to punctuate eating local cuisine with the comfort food that I’m used to, to keep my tummy in check. For this, the Ganesha Restaurant had good reviews and didn’t disappoint. It gave us just the bold kick we needed to revive our taste buds.

M Cocina Arabe, tagged as a Lebanese restaurant, is another popular option, whether you’re a vegetarian or not.

The Arab influence in Cartagena dates back to the 19th century, when Arab immigrants fled the oppression of the Ottoman Empire to seek religious freedom. However, the presence of the Lebanese community became more prominent in the 1960-70’s, as more of them left their home country to settle Colombia’s Caribbean coast, according to Colombia Reports.

It’s clear Lebanese food has drawn a following. We had to grab a seat outdoors because the indoor dining room was completely packed. I ordered a mezze platter to be able to taste many items.

Finally, there are several great vegetarian options at the Mexican Maria Bonita Taqueria adjacent to the lively Plaza de Trinidad, which sets ablaze with spontaneous dancing in the evenings. The soft tacos filled with a variety of squash and roasted eggplant took me back to my trip to Mexico City when I tried a squash flower soup for the first time.

When I booked the trip to Cartagena, I wasn’t expecting much by way of food for vegetarians, but I wanted to try as much as I could to experience the city to the fullest. Ultimately we found that Colombia’s jewel city revealed gastronomic treasures and centuries-worth of cultural wealth hidden within its colonial walls.

You can learn more about the food of Colombia and its history and influences by booking a walking street food tour by Cartagena Connections, visiting the Choco Museo to learn about the country’s cocoa history, or by visiting a local market guided by Scarlet Macaw Trips for personal shopping and tasting experience of local, seasonal produce.

Experiencing the foods of Latin America – I want to hear from you!

What have been some of your favorite foods when visiting Central, South America and the Caribbean? Have you been to Cartagena? How do you feel the food reflected the culture and history of this colorful city? Share your experiences and tips in the comments!